Rocking Chairs and Dining Furniture
Designed for Comfort and Built to Last
Since 1992.

When it first came out in 1975, a friend gave me a copy of Texas Furniture—a book about furniture handmade in Texas before the railroads came. It has served as inspiration ever since.

Leslie and I became friends with Lonn Taylor, the principle author, and Dedie, his wife. That friendship has been a joy, an education, and a validation.

Lonn was director of the Winedale Historical Center in Texas where some of the furniture in the book resides. He later was a director of portions of the Smithsonian. He used terms like “material culture” and made me feel like we added meaning and value by the work we do. Retired to Ft. Davis, Lonn and Dedie were renowned hosts—their dinner guests sat in our chairs. 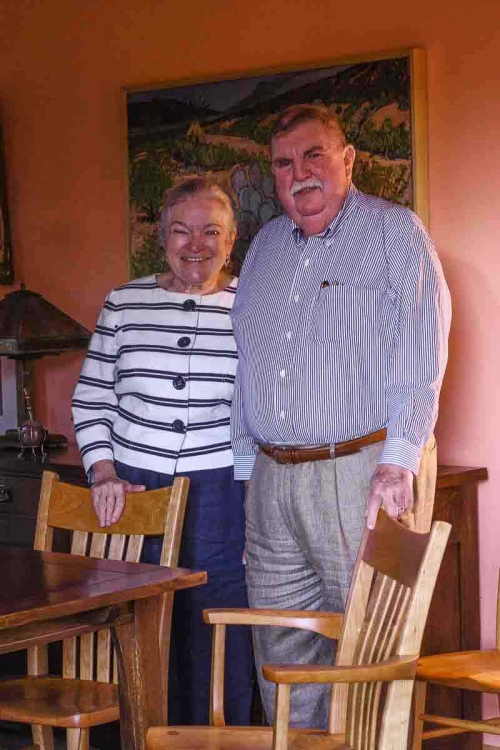 Manufactured furniture from the east eliminated the local craftsmen hand-making furniture in the state. There were two main categories of this early Texas furniture. One was made by those who migrated across the south (my people). They made rather crude pieces reflecting a log cabin, wear-out-the-farm-and-move culture. Those who came directly to Texas from Europe (Germans mostly) often had served serious apprenticeships in the trade, and made better stuff. Their work was more worthy of representation in Texas Furniture and its sequel.

We who aspire to the highest order in our craft and trade don’t have a longstanding tradition to draw on, in fact we have some of that “wear the farm out” stigma to overcome. But we keep enough provincial patriotism to say, with pride, Made in Texas. Lonn gave us words and heart.